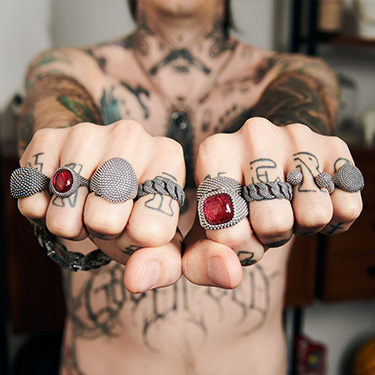 by Roberto Dibenedetto, who grew up with a passion for jewellery, design, accessories and fashion.

His journey was one of work and intuition, driven by a need to literally create something new and find an outlet for his creative energies.

Starting out in a small store, the brand's customers were immediately drawn to the modern, unconventional range of jewellery on offer.

The real key to Nove25's early success, however, is that it was one of the first brands to offer customised jewellery.

The boutique grew, opening new stores and gaining a wider following. Over the years, however, it has never lost sight of its mission to capture and convey its customers' ideas and emotions, creating jewellery that lets each individual express themselves, whatever the context.

Something more personal and innovative was needed to revolutionise the jewellery world, something that symbolised Made in Italy quality and a tradition of which Nove25 has become an ambassador, representing the personality of consumers as well as its founders.

The key to Nove25's success today lies in going beyond the concept of jewellery to serve as a Creative Laboratory, capable of translating ideas and personality into physical pieces.

Nove25 has become a veritable language, which goes beyond the object – the product of work carried out by a team of designers, 3D artists, creative professionals and craftspeople, incorporating influences from tattooists, street artists, musicians and the customer, as appropriate to each individual project.

Save products on your wishlist to buy them later or share with your friends.

With Amazon Pay and Login with Amazon, you can easily sign-in and use the shipping and payment information stored in your Amazon Account to place an order on this shop.

No account? Create one here
Product added to wishlist

We use cookies to enhance your user experience, tailor and measure ads and improve the quality of our website.
Accept to receive all or go to Cookie Preferences to manage your settings.